An Aussie girl and an Englishman meet in Thailand and make their lives an endless Grand Tour.

Follow us as we road trip Australia and New Zealand, backpack South America and explore Europe.

As city-dwelling thirty-year-olds, we can’t help but love brunch. But on the road this isn’t really feasible or affordable. If we’re feeling particularly energetic in the morning then we’ll fire up the gas stove for a tea or coffee and jaw some cereal. But more often than not it’s a dingo’s breakfast – a piss and a look around – before we drive off to the next destination, where all our hopes lie in lunch.

We were pretty excited to find Cosy Corner Cafe tucked between Albany and Denmark where the beach meets the pastures. It had won several good food awards so we were quietly confident that they wouldn’t burn our coffee. They served up a great breakfast, that neither of us could finish. Turns out Gaz had the dreaded two-day hangover, not ideal when you’re driving through WA’s wine country for the next two days.

Stopping in at a toffee factory on our way into Denmark, the shop lady suggested that we should stop eating her samples and turn around and visit Green Pools and Elephant Rocks, about ten minutes back down the road. Shelley was a bit dubious, if she had a penny for every time someone said a rock looked like an elephant….

Walking down to the water from the car park, a right turn took you to Green Pools, a shallow, calm bit of beach that formed a natural swimming pool, rimmed by some sexy looking boulders Binalong Bay would be proud of. It had the kind of bright clear green water that tingles in your fingers, where you desperately want to jump in! But there were quite a few old blokes in there doing laps so we took the right turn to check out Elephant Rocks.

This site was even more incredible. Mostly because the rocks actually looked like elephants! Like a herd hanging out at a waterhole, splashing and playing in the water, but wary enough to stay in a tight group in case something dangerous and bitey was lurking. The water was a clear pale blue; we couldn’t resist so we swam in our smalls. It was our second impromptu swim in as many days and we were starting to think that it was a great way to get clean, as long as you don’t mind a salty residue.

We arrived in Denmark, which while still officially in off season, had its hippy flags flying. We could see how pleasant it would be to rent a holiday house here in the summer, hang around the beaches and go walking in the woods. But Lonely Planet suggests that this is what most of Perth’s hipster population does, loading up their 4WD in hopes of maybe getting some dirt on the wheels.

After purchasing some liver detox tablets from the organic store and teasing a hippy store owner by trying on her alpaca threads, we scampered off to Walpole to visit the Valley of the Giants.

Shelley loves big trees, but dislikes the organised religion around them, so there was a lot of umming and ahhing and to whether we should fork out $42 for the treetop walk, 40 m in the canopy. We did. While the trees weren’t as big as California’s giant redwoods, there were still impressive. The red tingle trees are endemic to the Walpole Wilderness Area and grow as high as 75m. Some of the trees in the ‘Ancient Empire’ tree walk were over 400 years old, with hollowed out trunks from multiple bushfires. The most interesting one, ‘Grandma Tingle’ or the ‘Gatekeeper’ has gnarled roots that look like a face, reminiscent of Grandma Willow in Disney’s ‘Pocahontas’ for those 90s children.

We continued to wind our way through the south coast forests to Margaret River, one of Australia’s most famous wine regions. After a short stop at a winery in Pemberton (they ran out of red) we arrived in ‘Margs’ at sunset. The caravan park lady recommended the Settlers Tavern for dinner. We were again beaten by the portion sizes (these were Texas big) but Shelley enjoyed her Margaret River pinot noir while Gaz stuck to a coke.

Judging from the surfing, sailing and music memorabilia on the walls, the Settlers Tavern was an institution in Margaret River as the venue for all of the touring bands over the last few decades. It possibly still is, though it seems a bit too wholesome now to be any real fun. In its heyday, when Margaret River was more of a surfing mecca than a hens weekend destination, it would have been a kind of paradise. Like Byron Bay, Margaret River is still beautiful, but also a victim of its own popularity.

The next day we checked out some of the surf sites around Margaret River. Not being surfers we couldn’t debate the pros and cons of each break but we wanted to soak up some of the locals’ vibe before entering the more contrived world of the mega wineries. We also enjoyed the names – ‘Tombstones, the Gallows, the Guillotine’. We watched one man battle the tides as he crossed the river mouth, he eventually made it to the other side only to break into a run. We were deeply impressed by his triathleticism.

The first winery we visited was Vasse Felix. The cellar door looked like a gallery, with dark stone floors and walls, hard wood finishing and a bronze sculpture of a reclining kangaroo under the stairs. We really wanted to like their wine, but after sampling all of the available reds we didn’t have a Goldilocks moment. What do you do in this scenario? We ran away.

Next stop was Cheeky Monkey Brewery just next door. It had a much more welcoming environment and macaroni cheese sandwiches.

The creation of craft beer is a complex, highly specialised process, just like wine making. So why are the cultures so different? We like to drink both wine and craft beer, but tasting and talking about beer is much more accessible and egalitarian. Why? Neither are reserved for the rich, peasants and princesses drink both. In fact we learnt the other day that Catherine the Great insisted on British beer at her dining table. Not to mention that the end result is the same – drunk people. Beer drunks are no worse that wine drunks, in fact, if you’ve been on a winery tour before, I’m sure you’ll agree that at the end of the day, everyone looks pretty rough. 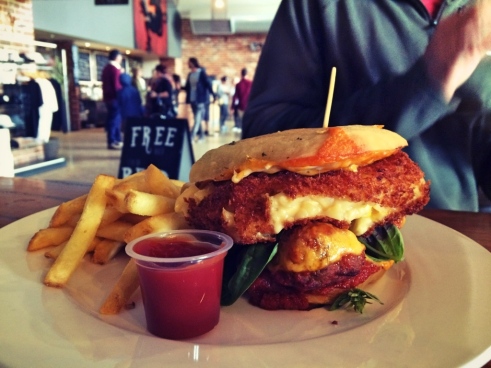 Last stop of the day was Capel Vale winery, just outside of Margaret River. Shelley was already a fan of these guys so we were hoping to have more luck here. We walked away with a very nice bottle of 2014 Cabernet Sauvignon from the Margaret River vineyard. We have no idea if it will survive the journey – both Shelley’s wine thirst and Gareth’s driving, but if it does it will make a nice toast to the end of our Australian road trip.

Highs: Bathing in the crystal clear water of Elephant Rocks

Lows: Not bathing in red, red wine. Could have spent more time in wine country

Travelling through foreign lands and reporting our findings for those unfortunate enough to have stayed home. View all posts by The Grand Tourists