An Aussie girl and an Englishman meet in Thailand and make their lives an endless Grand Tour.

Follow us as we road trip Australia and New Zealand, backpack South America and explore Europe.

A wise grey nomad in Peterborough had advised that we give the pub at the end of the Flinders Ranges a go. The Prairie Hotel in Parachilna turned out to be as hipster as the outback gets, with its own craft beer label and a curated playlist of housey beats by obscure Turkish DJs ( had to ask the FOH Grant what kind of amazing we were listening to during tucker time). We ordered the feral mixed grill, which consisted of kangaroo steak, camel sausage and emu mignon. Roadkill jokes aside, it was all really delicious. Don’t just take our word for it, David Dickinson from Bargain Hunt was there with us, and we suspect he is the Supreme Grey Nomad, at least back in Britain.

Fossicking for fossils at Nilpena

The next morning we took a local marine biologist up on the offer to show us around an Ediacarin fossil site. Apparently, the fossils on Nilpena Station may hold the key to the genesis of modern life. The site dates back 550 million years, back when Australia was a sea and still joined with Antartica. Storms would bury all the little creatures on the sea floor with sand, but their imprint remained. Years later, two tectonic plates around the Flinders Ranges collided creating 50km high mountains which eroded over time to make some of these fossils visible today.

They show the first filter-feeding creatures, the first mouth-to-anus (hehe) feeders and the first creatures to freely move around the sea floor. Matt, our guide was incredibly informative, although he made it clear that the site, having only been recognised in 2004, still offers more questions than answers, and many of the creatures are still to be named. The researchers can only visit the site for about two months in winter every year, but are hoping to gain UNESCO World Heritage listing and create a living museum, similar to the major fossil site in Canada’s Rocky Mountains. 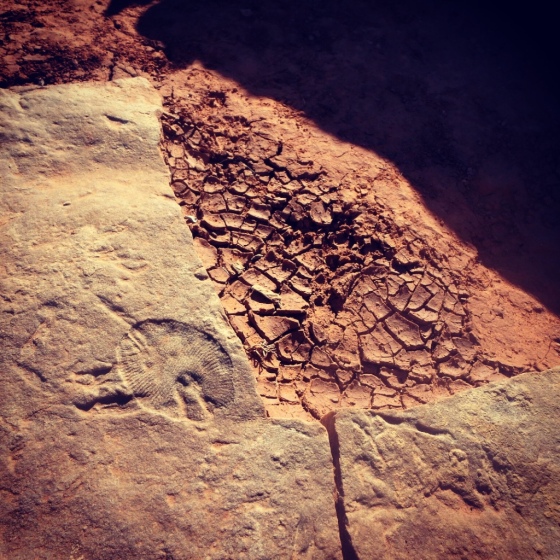 Moseying on to Marree

Having been told that when you get to Marree Hotel, you’ll feel totes outback, we drove straight to the pub and ordered a beer. We sat outside in the sun watching a steady stream of travellers draw in while realising that there were no locals around. Marree was once a stop on the old Ghan train that went up to Alice Springs but now everything has that abandoned vibe, a recurring theme in our travels so far. We watched an emu cross the rail track past an old abandoned Commonwealth Railways engine and wondered where these locals were and what they did. Meh. With the sun beating a steady retreat, we again took to the road. Well not any road, the infamous Oodnadatta Track.

Lows: Didn’t get a chance to stop in Parachilna Gorge as we were racing the sunset

Travelling through foreign lands and reporting our findings for those unfortunate enough to have stayed home. View all posts by The Grand Tourists

3 thoughts on “Eating ferals and meeting fossils: Parachilna to Marree”